We Spoke To Fans | Home Edition

New research has revealed the UK’s viewing preferences during lockdown – and highlighted that consumers are keen to get back into cinemas as we adjust to the ‘new normal’. 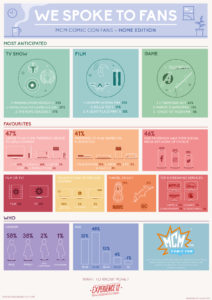 The survey revealed that 61% of respondents prefer watching films to TV – which is backed up by the fact that two-thirds (66%) say they will be heading to their nearest cinema within two months of venues re-opening. A further 11% said that they would go to watch a movie within three months.

The most anticipated theatrical releases – either due this year, postponed due to the COVID-19 pandemic, or those scheduled for 2021 – have also been revealed via the research:

TV has, however, been incredibly important to consumers during lockdown – and remains so, with most people still spending more time at home.

Streaming services in general are consumers’ favourite way to view content, with 90% opting for this format, compared to 4% preferring on-demand TV and just 3% choosing live TV.

Unsurprisingly, veteran streaming service Netflix leads the way in terms of subscriptions, with 92% of respondents accessing this service, followed by Amazon Prime Video at 72%.

Disney+ has enjoyed a fast uptake, with 62% of respondents subscribing to the service, no doubt thanks to it boasting some of the biggest IP in entertainment, but also due to its discount launch campaign during the early weeks of the pandemic. Indeed, 47% of the sample audience said that they had subscribed to Disney+ during lockdown.

In terms of on-demand TV services, the BBC iPlayer is way ahead, with 47% of respondents claiming it as their favourite, compared to All 4 at 24%, Sky Go at 14% and ITV Hub at just 3%.

Netflix remains top when it comes to content, with 54% of the TV, film and games fans claiming that the service makes the best TV shows. HBO came in at second place with 21% of votes, with both Amazon Prime Video and the BBC also applauded for their output.

TV Series Most Excited About

“Home entertainment has provided a lifeline for people during the lockdown – and still now, with many still spending much more time at home,” said Experience12 Managing Director Chris Whittle.

“Netflix, Amazon Prime and now Disney+ are keeping the nation entertained and, while our research shows that Netflix retains the crown (and, indeed, The Crown) when it comes to the best content, it’s interesting to see that it’s actually output from Amazon Prime and Disney+, such as The Mandalorian S2, The Falcon and the Winter Soldier and The Boys S2 which are the most anticipated.

“Meanwhile, it’s clear to see that pop culture fans are keen to get back to the cinema as soon as they can. Superhero movies are, as ever, what fans are looking forward to the most. But what’s interesting is that – while 79% of our respondents claim to prefer Marvel over 21% who prefer DC – individual movies from the two comic book brands show preferences slightly skewed the other way – with Wonder Woman 1984, Bill & Ted Face The Music and The Batman from DC and Black Widow and Guardians of the Galaxy Vol.3 from Marvel topping the polls. Maybe DC is starting to fight back…